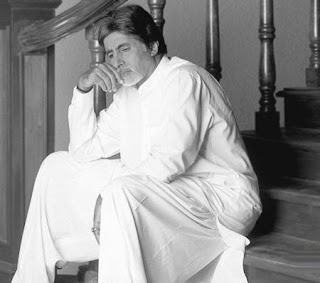 Let me get this straight.! I`m not a diehard fan of Amitabh Bachchan. But I have admiration for his sheer personality and that wonderful deep baritone voice.! He is a great actor, with several hundred films to his credit and truly one of the biggest names in Indian Cinema.

But above all he is a great human being and truly an icon, so the media obviously wanted to get some tidbits about him, and provide gossip, controversy and interesting facets of his life everyday on national Television.

To have seen glaring distorted facts, and unnecessary controversies over nothing being created by the media circus and all the hype and hoopla about oneself, can upset any common man. So what do you do when you get blamed for things totally unknown to you. You go ahead and clarify things. Vent out your feeling, pour it out in public, today thanks to the internet, blog it out.!

Sir, this is one of the better decisions that you`ve made in your lifetime. As the media is at a loss on how to intervene as you communicate directly to the Indian public, you go ahead and give a fantastic final blow.

Anchors move on to the next programme - a rape or shoot out, car having run over pedestrian sleepers. Get the blood, get the relatives in various stages of shock and dismay, weeping and distraught close ups would help. Catch the cops for comment and the ambulance taking away the bodies. Didn’t get the shot ? Damn !! No problem, pick up the visual from the day before as the bus plunged into the river, patrol cars and ambulances were seen there as well.

And they talk of monotony and lack of fresh content in our cinema. They talk of ripping off foreign DVD’s and plagiarism. Where did they get there programme ideas from ? Are any of their presenters sitting in front of studious looking desks any different from the sets of the BBC or ABC or CNN Studios. Is ‘Seedhi Baat’ not ‘Hard Talk’ is KBC not ‘Millionaire’ ?

Truly dont we see an end to these irritating news channels as more celebrities and personalities, decide to finally blog it out.? Let`s get to know things in first person. Soon like there are television sets in every household there would also be computers and internet. The media might as well start behaving while there`s still time.
Pic Courtesy : bollycircle.com
Posted by Unknown at 4:44 PM

hi
Can u please give the link to Big B's blog. i have always appreciated his command over the language:both Hindi and English.

DO you have the link to this blog? I have only read Aamir Khan's blog before. Have heard that many actresses write blogs but where are they? I think it's cool that celebrities are coming out with personal blogs because it makes them more human to the common man!

@Chitra: Hi Chitra, The Blog URL is blogs.bigadda.com/ab Truly great command over Hindi, I know that, It`s only after reading his blog that I realized he`s truly articulate in English as well.

Wow! That looks like a good read. I read Aamir Khan's blog. Now AB too. :)

thank you for sharing
destek@evdeneve-nakliyat-name.tr