The Legend of Mad Kokila

Some souls are sent to earth, with lesser privileges, with almost nothing, but despite all barriers, they find each other, embrace each other and live on.

Gowripuram was not unlike any other village. It had it's own group of innocent villagers, mostly farmers, some lorry drivers, some mechanics and some casual labourers. Some were money lenders, some were housewives, some worked in the garment factories nearby, but all were part of Gowripuram. All were benefactors of the temple in Gowripuram, the blessed river Nelli which provided water and life for all their needs.

Like most other villages, Gowripuram also had it's own legends and folklore, that the villagers proudly related, be it the tale of the temple elephant, which brought up the idol of the goddess from the river or be it the legend of the wicked sorcerer who kidnapped the king's daughter and got punished for it, or the tale of the donkey with a vengeance, that stopped the rains.

But there was one story, that only some villagers, mostly old men or lonely women, told with a shudder, with a shivering of their lips only when prodded, for the story had occurred in recent times, and was no myth for sure. It was also believed that the legend of mad kokila was a curse upon Gowripuram's otherwise peaceful presence.

No one knew where kokila came from, Where was she born ? to Whom?. The truth was that nobody knew. The old beggar woman near the temple had called her by the name 'Kokila' once and the name stuck. She was a beautiful girl, with hazel brown eyes, long slender legs and long hair. She was always on the streets mostly playing around near Mohan's tea stall. She played all day long and when night arrived, she slept below the old banyan tree along with the old woman. It was one rainy night, when the winds howled and the sky turned deathly dark that Kokila became alone. The old woman passed away in her sleep and kokila kept crying as the villagers burned her corpse far away. Kokila knew her life would now change, that her tomorrow would be different, difficult.

The villagers, were not ready to take in Kokila. After all she had spent all her life till then as a beggar. Who knows what bad luck she might bring, but they built her a small shed, gave her food and so she lived. From dawn to dusk she roamed about, eating whatever she got and then she came back and slept, and life moved on in Gowripuram. No one noticed that Kokila never smiled, never laughed, never cried. And then came Appu, and for kokila, life was suddenly colourful, more fun and full of sound. Where he came from nobody knew. Like kokila, appu was alone, he roamed around and slept at night in the forest. Perhaps because their lives were so similar, there was an instant connection. Kokila and Appu became inseparable as Kokila brought him to her shed. They roamed together and slept together.

Souls destined to meet, shall often meet. Maybe late but there's no doubt about this fate. Meet they shall and their lives, they shall share.

Often in the rain, it grew very cold. Kokila shivered, but Appu would cover her legs with his body and lend her warmth. In the summers, when Appu panted in the heat, kokila collected cool water in earthern pots and sprayed it on him. He would jump and keep running around her playfully, with delight always wagging his tail. Over the years kokila grew, tall and supple, full of youth and brimming with the ripeness of adolescence. A great pair they were, she and Appu, two people whose lives were full of each other.

The once unmindful villagers, in who's world kokila and appu never existed, today they kept staring at Kokila, making fun of her, jeering at her and trying to hug her. But Appu was always nearby. With his resounding bark and fierce grunt, he often set them running. Somehow Appu knew, that in their little world, outsiders brought only misery. With Appu she walked, and roamed all the streets picking at rubbish, sharing food, chasing chameleons and running helter and skelter. They spoke through their eyes, reading each others minds completely.

Days passed by often fun, sometimes tough due to hunger, sometimes due to heat or cold, but always together but one dark day kokila woke up without the soft presence of Appu's fur. Shrieks, barks and shouts rent the air as Gowripuram awoke to the violent symphony of pain and desperation. Kokila ran to the forest's edge with all the energy she had. Behind her the village gathered and stood looking at a cloud of dust, a pack of wild dogs barking and tearing at each other, running all around. Poor kokila, only she could see him, appu in the middle of it all, tired and haggard, wounded and hurt. Poor Appu.


Even souls have to part, but so often they take with them, the life in the souls of those they leave behind. The souls who remain, lose the remaining life they have, in the tears they shed until they unite, forever again. 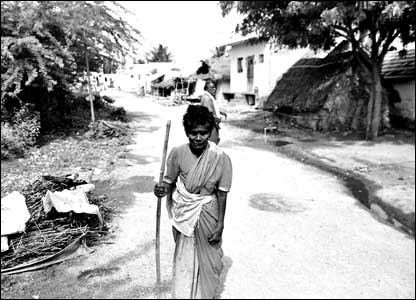 In the dark of the night, in the silence of the moonlit night, in the chill of the cold windy night, they crept. They, the blinded poor souls who were deceived, that there would be life, emotion and womanly presence in Kokila's body, crept up till where she sat, beside Appu's departed trail. Blinded they were both by wine and lust, blinded both in body and soul.

As one of them, crept behind her and shook her shoulder, she turned back, her hair haywire, her face almost blue, her eyes blood red. She wounded him with her nails and screamed. They stepped back in fear as they saw Kokila. Frightened to move they just stood there as kokila screamed and screamed. She ran towards the village in seething rage. Screaming at the top of her voice, as once more Gowripuram arose to a violent symphony of anger, fear and blood red madness. Kokila was running fast, tearing her clothes, shouting at the top of her voice, shouting aloud, calling out for Appu. The village looked on stunned as kokila, ran in all her nakedness towards the forest, with all her madness. Gowripuram had lost kokila for ever as she was lost in the forest. No one knew what happened to her.

But the legend does not end, because the learned, and enlightened, the wise of gowripuram later came to know that Kokila was a gifted soul, her Appu had left her, but not without a parting gift, her madness. And so the legend is related to everyone who searches for more. After listening to this much they often depart, but only the wise remain to learn that for two souls to connect, to die for each other, they don't have to be human beings, they only have to be humane, only few stay back to realize that blindness is not in not seeing the sky ,or the bodies, but in not seeing the souls and privileges in life is not in all that can be relished, but in sharing with others all that you have to relish, and then they shared with everyone, the legend of Mad Kokila of Gowripuram.

Email ThisBlogThis!Share to TwitterShare to FacebookShare to Pinterest
Labels: Stories

This reminds me of the beggar girl I saw along the river banks in Guwahati. She seemed so smart and self-assured in her madness, and yes, she was stark naked.

A most disturbingly sight recalled by this highly visual story.

is this a true story you are narrating ? or some excerpts of a book ? where is Gowripuram ?

PS: I didn't do any massages in Bangkok...so busy in visiting the places, eating thai food and dancing in the night with thai friends ! maybe should try one next time !

@Shankari : True Shankari. Such experiences stay with us forever, and leave a lasting impression on our psyche. Mine too.

@Prash: To answer your questions, No it's not a true story, something I imagined and cooked up, but definitely not cut off from reality. Not an excerpt from any book, if so I mention the source always. :) and lastly I have no idea where Gowripuram is. Perhaps there is such a place, but i'm not aware of any, again just a name I invented. 100% Fiction, prash.

Glad to know that you had a great time in Bangkok.

This is just a story idea that formed in my mind, when I saw this middle aged woman, sleeping outside a closed shop, with a dog resting against her legs. I don't know, somehow that instance of time, something in my mind sort of clicked.

I see many homeless people with dogs for companions.

Some people would grudge them that. The idea being, If you can't take care of yourself why have a pet?

Like your story illustrates, they are more then that, they are friends & wonderful companions.

@handmaiden : Thanks handmaiden, yes that is again something, which I realized recently.Pets are different and friends are different, Dogs can be great friends.

And u wrote it with so much of brilliance.


**Even souls have to part, but so often they take with them, the life in the souls of those they leave behind. The souls who remain, lose the remaining life they have, in the tears they shed until they unite, forever again


Really loved that one!

@Keshi: Thanks a lot! Your words inspire me often to write more and thank youi for that.!

"Souls destined to meet, shall often meet. Maybe late but there's no doubt about this fate. Meet they shall and their lives, they shall share."

I loved these lines especially.I believe its true as well.

Mad is something which people call someone, if their behavior is out of the realms of their narrow-minded understanding of life. Anyone who doesn't follow the unwritten social laws are termed mad.
It is not that simple. What if, the so called mad person is just on a different level of consciousness?

@Sree : Very True Sree! Thanks for dropping in.

@Deepak: // Mad is something which people call someone, if their behavior is out of the realms of their narrow-minded understanding of life. Anyone who doesn't follow the unwritten social laws are termed mad. // Well Said, Deepak..! Like you say they might well be on a different plane of consciousness. The way the world percieves madness and how they percieve the world, is something which makes it very interesting to analyze. Deepak, you must be knowing about how so-called-lunatics used to hammer nails into a tree in Chottanikara temple in Ernakulam. It is in the backdrop of it, that I wrote my earlier poem "Ritual of Madness"